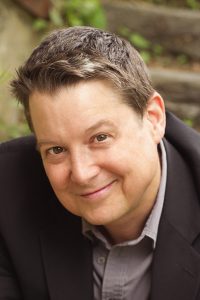 For today’s edition of the Open Mic Creativity and COVID-19 Special Project I check in with author, speaker, editor, writing coach and podcaster (whew!) Jon McGoran. His YA science fiction novels have drawn big praise from the likes of Jonathan Maberry and Laurie Halse Anderson, which is pretty good company to keep.

OM: This lockdown clearly has some folks going stir crazy. How are you holding up with being on lockdown?
McGoran: I’ve been mostly okay, in no small part because my day to day hasn’t changed all that much. I work at home as an author and editor, so my daily routine really hasn’t been impacted. My wife is working from home now, and that’s been different, because I’m used to having the house tm myself during the day, but for the most part, that’s been great. But like most people, as the weeks drag on, the tragic news, the lack of social interaction and the worries about the future have all been getting to me. But the Zoom chats, conversations, cocktail hours etc., have helped. With a book coming out, the lack of a launch or other in-person events has really added to the strong sense that things just aren’t right.

OM: Some people I talk to have really been struggling with their creativity during all this. Some are obsessed with the news or social media, and others just feel restless or find that the change in their routine has interrupted their creative spark. How has it been for you in this regard? Has this situation impacted your creativity at all? Have you changed up any of your routines?
McGoran: I think it probably has negatively impacted my creativity. I’m still having ideas, but when I try to sit down and write, I’m easily distracted. I’ve been very busy with my developmental editing work, and amid such uncertainty I’m loath to turn any down, so that has probably hindered my creativity as well. [This section could use a little pizzazz. Like, “I still have the usual onslaught of ideas that wake me up in the middle of the night…” or “Amid such uncertainty I am compelled to accept pretty much every viable freelance assignment that comes my way, so I’ve been so busy with that work that I barely have time…”]

OM: You write science fiction-based YA with themes that address some of the ills we face in society right now, especially what Kirkus calls “manufactured prejudice.” Given some of the discord and public displays of hate and anger we’ve seen of late, is any of this going to be fodder for a future storyline of yours?
McGoran: Probably so, yes, although my latest book, Spiked, is the final book in this trilogy. I am working on several projects right now, and most of them do touch on similar themes, although from slightly different angles. It has been striking, as I conceived of and wrote the Spliced books, and as they made their way through production, how many ways the world has leaned into the books’ themes, and their scientific concepts, as well. Spiked even has a pandemic angle! After researching pandemics and writing about them, it has been quite surreal to find us in the middle of one as the book comes out—not that this all wouldn’t have felt surreal anyway!

OM: I’ve heard widely disparate opinions on how this will affect the publishing industry going forward. What is your perspective on this?
McGoran: That’s the big questions, isn’t it? For the most part, I think it is going to be temporarily hard and lean, but people still want stories and before too long things will get I imagine some of the distancing strategies that have arisen will probably be with us to stay, especially by the time this is really over—with a safe and effective vaccine that has been widely applied to the population—so I think some of the changes we’ve seen these last few weeks will end up being permanent. For instance, I wonder if e-books will retain the market share they are capturing now, if people who have previously been resistant will have gotten used to them by the time this is finished.

OM: You have a new book coming out any minute now. Tell us about it.
McGoran:  Yes! “Spiked” is the third book in the Spliced trilogy. The first book, Spliced, is now on ebook special for $1.99 for a limited time, and “Splintered,” the second book just came out in paperback. The books take place several decades from now, in an America altered by climate change, energy scarcity, declining biodiversity, among other factors. The central premise is that genetic engineering technology has matured to the point that it is available on the street as a form of body modification. Young people called chimeras alter themselves with splices of animal DNA, for a wide variety of reasons. They face a backlash and are used as a wedge issue by a politically ambitious tech billionaire, who is pushing a law defining anyone whose DNA is not 100% human as a nonperson. Of course, the billionaire causing all the trouble made his fortune selling computer brain implants, so there is an interesting tension with this one group of transhumanists calling the other transhumanists nonpersons. The first two books focus more on the splicing and the backlash and ways people try to exploit the chimeras. The third book is a little bigger and also focuses on the ramifications of computer implants that are getting more and more powerful, the widening digital divide, humanity’s consumption of the earth’s resources, and how a pandemic can upend all that and more. It also reveals some big secrets buried in the first two books. It’s been quite a journey for me, writing this trilogy, and letting go of these characters who I’ve spent so much time with, and become so attached to.

Rich Ehisen is an award-winning journalist, editor, and public speaker who has spent more than twenty-five years interviewing and reporting on politicians, athletes, authors, CEOs, celebrities, artists, cops, doers, and dreamers all over the country. He is the managing editor of the State Net Capitol Journal, a LexisNexis publication that covers all 50 statehouses, and his freelance work has appeared in a variety of publications across the country.
← The Creativity and COVID-19 Special Project, Day 30: Rowe and John CarenenThe Creativity and COVID-19 Special Project, Day 32: Alexandra Sokoloff →

It All Starts With the Writing: My Interview With NPR’s Tamara Keith