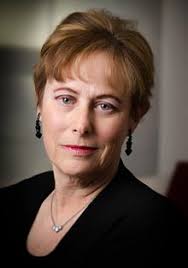 For someone who never intended to become a writer, Chicago-based Libby Fischer Hellmann has done a pretty good job of it. After years in TV news and then public relations, Hellman penned her first novel in 2002, “An Eye for Murder,” the first in the Ellie Foreman series. The book was nominated for several awards, and it set Hellmann off on a whole new path. Fourteen more books followed, as have many more awards and nominations. In recent years she has also significantly grown her profile in the crime fiction world, hosting writing-centric radio and television shows and serving a term as president of Sisters in Crime, a national organization dedicated to supporting the growing number of women who write crime fiction, mysteries and thrillers. We sat down recently to talk about her work and the changing nature of the publishing industry.

Open Mic: Many writers these days are avoiding anything political both in their writing and in their public commentary out of concern it might cost them half their potential audience before they even read it. But your new book “High Crimes” gets right into the heart of the current political environment. What is the motivation behind the book’s theme?

Hellmann: I know it was risky to write a political book in the middle of a volatile political climate, but I had to do it – I had to write this book. The reason is that I went into a period of rage after the 2016 election. Especially as we found out more and more about Russian interference, what kind of man Trump was, and how he intended to lead the government.

In fact, the day after the election – like the rest of the world – I was in shock. At the same time I knew that something fishy had been going on in Wisconsin and Michigan and Ohio. I didn’t know what and I didn’t know how and I don’t know if we’ll ever find out. But it was clear that votes were manipulated. Whether it was Russians or the Republican Secretaries of State I don’t know. I am not really a conspiracy theorist, but in this day and age with the ease and the lack of security over the voting systems, anything was possible, and that infuriated me. Unfortunately my days of rage lasted a year. I couldn’t write, I couldn’t do anything. Part of my not being able to do anything and feeling semi-paralyzed was that I was listening to people who said don’t write about it. Don’t jump into the fray.

However, a couple of days after the election I’d joined a Facebook resistance group that exploded up to 42,000 people in three months. The founder is a woman named Suzy Fischer, and she shared my rage. A year after that I was looking over some of the posts on the website and it suddenly came to me: what if the founder of a resistance group was assassinated? Who would have done it and why? Was it a cover up? Was it a conspiracy? And that sparked the feeling I get when I know “this is the book I need to write.”