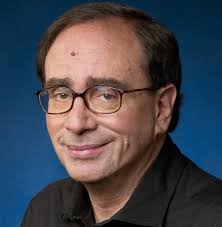 To millions of kids and teens, R.L. Stine is synonymous with a good – but still totally fun – scare. The author of beloved franchises like Goosebumps, Fear Street and others, Stine is has been called “the Stephen King of children’s literature.” But Stine is anything but scary in person. As he showed at his recent presentation at the 2017 San Diego State University Writers Conference, he is in fact quite funny and very gracious. I sat down with him afterward to talk about his career and the state of the industry.

Open Mic: This is fabulous – I’m sitting here with R.L. Stine, my daughter’s favorite author when she was a little girl.

Open Mic: But you have so much beyond Goosebumps, which my daughter loved. I mean you’re still one of the most relevant writers in the world today for doing what you do.

Open Mic: Is that the right word, relevant?

Stine: No one ever used that word to me. Honestly, no one ever said relevant to me.

Open Mic: Oh well, on occasion I hit something unique.

Stine: Keep going. I still get the seven-year-olds, that’s what counts. If it was all 30-year-olds I’d be in trouble. I complain because it took them 23 years to do the Goosebumps movie, but it worked out because the 30-year-olds came for nostalgia and they brought their kids and that’s why the movie did so well.

Open Mic: Were you happy with how the movie came out?

Stine: Yes, very. I got really lucky because I had almost no input into it at all.

Open Mic: Some authors I’ve talked to whose books have been made into movies were very un

happy with how they came out.

Stine: Yes. You know, you don’t know what you’re going to get. It can be horrible. Some Stephen King movies are really good and some of them are awful. Usually you get to be what’s called a “consultant,” which means they don’t have to pay any attention to you at all. So you just have to be lucky and somehow I got lucky with the Goosebumps film. Jack Black was great and the whole idea was really nice.