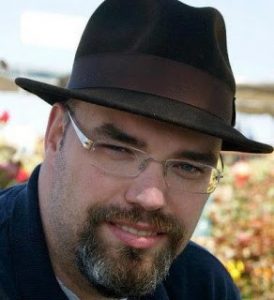 For award-winning author Terrence McCauley,  noir’s the thing. From his fast-paced University series of techno-thrillers to the prohibition gangster tales of books like “Prohibition” and “Slow Burn” – all via some of the best short crime fiction you will ever read – noir is the backbone of everything McCauley writes. I sat down with him recently to talk about this new book, “The Fairfax Incident,” the fine art of the noir novel and the power of binge reading.

Open Mic: First, tell me a bit about the new book.

McCauley: The new book is called “The Fairfax Incident.” It’s set in the same basic universe as my techno thrillers that are set in modern day, only this time it is in 1933 New York City. It is about when a suicide is not a suicide, and that’s of course because it’s murder. My protagonist is a character who appears in a lot of my books, a corrupt NYPD detective named Charlie Doherty. He’s the go-between for the police and the gangsters who run New York City, a man who lives in two worlds. He is a cop, but also beholden to the political powers that be. I introduced him in my book “Prohibition,” and then featured him in another book called “Slow Burn” that is told from entirely from his perspective. That one is set in 1932 in New York City and it is about the aftermath of what happens in “Prohibition.” So you see it from where he’s drawn in to a murder/kidnapping he thinks is going to be an easy assignment for him but winds up involving one of the most powerful families in New York City. After that, you come to the events in “The Fairfax Incident.” The same family that Charlie works with as a cop in “Slow Burn,” he is now employed by as a private detective. He is asked to look into the apparent suicide of Mr. Fairfax, a wealthy insurance company owner who comes from a long line of insurance people. His widow doesn’t believe he has committed suicide and she’s asked Charlie Doherty, who is known for his discretion by the wealthy people in New York City, to find out exactly what happened to her husband. She doesn’t think he was decent enough to kill himself and she knows there must be something going on there. So that’s where his investigation begins and of course, as in any good book, it’s never just that simple. It winds up involving a lot more people and a labyrinthine of plot twists. It goes from being about one person who killed himself in an office to involving some of the most evil people in the world.

Open Mic: What fascinates you about that time of prohibition in our history? Does it just fit the kinds of stories you want to tell or is there something more to it than that?

McCauley: It’s a little bit of both. I love the way that stories were told before we could rely on technology and smart phones and cable television and YouTube videos right there in the palm of our hand. It was a time where people had to be more personable, where they had to interact with each other and go through all of the hardships of regular life without technology. When you add that they were also going through the beginning of the Great Depression and prohibition was the law of the land, it adds another layer of drama that I think is appealing to a writer and certainly seems to be appealing to the readers. I was also lucky enough to have a grandmother who grew up in that era. She regaled me as a young child with stories of growing up in the same neighborhood as Jimmy Cagney. It struck me that she always pointed out that they were never friends, just that she knew who he was. That kind of honesty stuck with me, because she could have told me they were best pals, and I was young enough that I would have bought it. She could have built herself up to be a hero, but that generation just didn’t do that. Another love of mine is politics and government and the Tammany Hall era. I had known about it some, but when I started doing research I said ‘God this is rich for development.’ People who tell stories or make movies set back then usually focus on the “hats and gats” element of it. You know, the tough talking guy with the fedora and the Tommy gun and the fast cars and the blowing up a speakeasy. But there was a heck of a lot more going on than just that stuff. Even though I admittedly write about gangsters, it’s not just about the action scenes and the guy in the alley with the cigarette. It’s about why that guy is in the alley. What was the journey that brought him there, and what is he looking to accomplish? In “Prohibition” you see that one of the biggest gangsters in New York, Terry Quinn, has to use his brains more than his brawn to find out who was trying to pull down his boss’s empire. In “Slow Burn” and “The Fairfax Incident” you see the corrupt cop and now somewhat-reformed private detective Charlie Doherty have to become more than he used to be in order to get the job done. He’s not really a very good detective, but he has to become one in order to pay back the person he owes his livelihood to, and along the way he finds something of a code like the traditional detectives of the Noir era.