In publishing industry terms, novelist Timothy Jay Smith writes thrillers. While he’s fine with the moniker, Tim would be the first to tell you that he is far more focused on telling a certain kind of story than with the box the industry wants it to fit into. We spoke recently about his new novel, “Fire on the Island,” (set for release on July 7 through Arcade Publishing), the impact of the pandemic on his marketing plans and the joy of not writing a series.

OM: Your new book “A Fire on the Island” is a romantic thriller. This seems like a slightly new angle for you. Tell me about it.

Smith: Let me clarify it is not a romance novel by any means. My publisher came up with the idea of calling it a romantic thriller, which I really like. I like it because I write somewhat in between genres – I kind of write mysteries, I kind of write thrillers, my style is more literary, and all that comes together when you look at my work. My publisher was looking for something that was a little bit different, and the fact that there are three or four different romances going on in this story inspired her to call it a romantic thriller. Which I think is brilliant! But it’s not really that different from what I have written in the past. I select a subject that I want to write about, something that interests me. What issue of social or economic justice do I want to tell people about, because that’s what drives my writing. It’s never just about telling any story and trying to sell a book.

In “Fire on the Island,” the central question is: what’s it like for a contemporary Greek village living through the dual issues of the national economic and refugee crises while also facing the very real threat of an arsonist trying to burn down the village? How do people cope with that situation? What comes through is the Greek character. The Greeks are dealing with a lot of huge issues, but there is still a lot of humor, and there’s still romance. It’s sort of like “Zorba the Greek” in that there’s a tremendous amount good feeling about it, but there are still very serious issues being raised.

I’ve been going to Greece since about 1972. I’ve spent about seven years there in total. It’s been very influential on my life, so “Fire on the Island” is my homage to Greece.  And you can’t have an homage to Greece without having some romance. 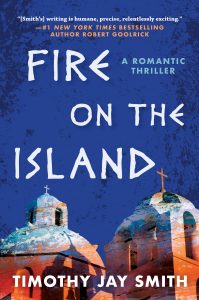 OM: Some writers hesitate to stray too far from the formulas that work for them and, to be frank, pay their bills. You’re pretty versatile, but does it ever make you nervous to try new things?

Smith: I’ve always struggled with the idea that I write thrillers because most thrillers are so plot-driven rather than character, and my work is more character-driven but still with strong plots. So what I try to do is find that subject I want to write about, then develop a suspenseful plot that will allow me to illuminate that subject. Then I figure out who my characters are so it all comes together.

When I first started writing and learned about writers who write a series and might be on book number sixteen, it was something I had never thought about, but knew it wasn’t for me. I don’t want to go back to the same characters and the same place every time. I like the idea of coming up with new stories and new characters and giving them life. For me, that’s the big challenge in writing.

OM: The COVID-19 pandemic has forced a lot of cancellations and other changes to planned marketing events. How has it impacted your plans around this book’s release?

Smith: There has been no change in the schedule whatsoever. My publisher loves this book, partly because, despite the gloom and doom we are going through, this book is not depressing. It deals with some very serious subjects, but when you set a book in Greece, and if you know the Greek character, you can put in some very heavy duty stuff and at the same time make people want to read it and to laugh.

OM: You are pretty versatile in your work, from stage plays to screenplays to novel. Are there any hard and fast rules you apply as a framework across the board to your work?

Smith: I’ve never thought of it in terms of rules. When I decided to quit working and become a full-time writer, I was 46 years old and left a very exciting career. I had always been very focused on what I wanted to do, which was to help other people. When I quit working, I had just come off of a very interesting job where I managed the U.S. government’s first significant program to help Palestinians in the peace process that had started in Oslo in 1993. At the end of that two and a half years Jerusalem, I had a story I wanted to tell. It was a story of reconciliation and a story of looking at the Israeli-Palestinian conflict from all perspectives, because there are not just two perspectives. There are at three or four perspectives that are critical to understanding it. So I decided to quit working and write my first novel, “A Vision of Angels.” And that has been the guiding light for me the whole time – I want to write about stuff that interests me.  I don’t have any other hard and fast rules.

OM: You were nominated for 2018 Pushcart Prize, and many of your other works have also been nominated for similarly prestigious awards. I hope this isn’t a silly question, but does being recognized in that way impact your work that comes after? Does it change your focus or perspective in any way?

Smith: It has a lot of impact on me, but not in regard to the nature of the work I’m doing or the stories I’m going to tell. With the new world of technology we’re living in, what it does change is the way I go about promoting myself. In spite of having a great publisher with a good publicist, and in spite of having another very good publicist whom I’ve hired, there is still so much stuff to be done. I like to work with book bloggers and the easier folks for me to contact, so when I win something I like to go out and promote that with them.

I will say that the Pushcart nomination was invaluable to me because my agent told me that was the thing that made him want to see more of my work. But it didn’t change anything in my approach to what I write. 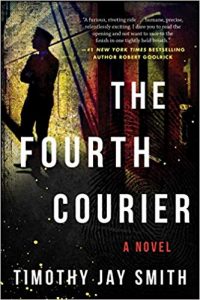 Here is one more interesting thing on this issue. My last novel, “The Fourth Courier,” does not have a gay protagonist, but does have a gay sidekick who is actually the hero of the story. There are also other homosexual themes to the story, but I never thought to promote “The Fourth Courier” as a gay novel because it has a straight protagonist. But the gay press picked up on the book and gave me some wonderful reviews. That gave me the encouragement to promote myself as a gay writer more than I was doing in the past. And the fact the book was nominated for a Lambda Award as the Best Gay Mystery has really changed how I promote myself. I feel a lot more relaxed about emphasizing the gay part of the stories.

OM: We are living in some of the most polarized times in our history, and this partisan divide seems to have infected every part of our society. Some writers feel we should avoid speaking out about or own politics in fear of alienating potential readers, i.e. the people who buy our work. How do you approach this issue?

Smith: I’m pretty clear in my own writing how I think but I’m not really taking on politics. I don’t worry about this issue at all. The market out there is big enough. I work social media constantly in terms of promoting myself, and I find different groups that are interested in each book. I understand the question and I understand the concerns, but I just don’t have that concern. I will say that I keep my personal political commentary to my personal Facebook page. There I’m very clear about my politics, but I don’t politicize my author page or my Twitter feed. I try to find other things that people are interested in.

OM: I’ll end with my usual question: I can put you together with one of the following three people for a long conversation. Who do you choose and why? Your options are: the great playwright Tennessee Williams, screenwriter Ethan Coen, or journalist and adventurer Nelly Bly. 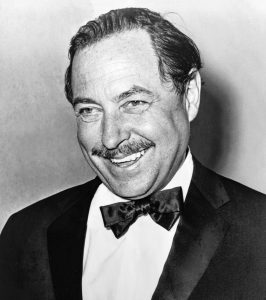 Smith:  That’s a really easy answer for me. It would be Tennessee Williams for a few reasons. I’m not particularly interested in sitting down with a movie mogul because I find the film industry to be just a little too arm’s distance for me. I don’t like the business itself. I love to write screenplays, I’d love to have an Oscar, but I don’t have a lot of questions for a film producer or director. I would also pass on Nelly Bly, not for any particular reason against her but because I would love to sit down with Tennessee Williams. I have just finished a book called “Leading Men: A Novel” by Christopher Castellani, which is a fictionalized portrayal of the life of Tennessee Williams and his longtime lover Frank Merlo. This is not the kind of book I would normally read, but I have not been able to put it down. I would have so many questions for Tennessee Williams now. I would love to sit down with him and ask if these things really happened. It would be a great conversation.

Tim Smith is one of a handful of authors who have appeared multiple times in the Open Mic. If you missed his earlier appearances, first in June of 2019 or in April of this year for the Creativity and COVID-19 Special Project, you can see them both here and here.

Rich Ehisen is an award-winning journalist, editor, and public speaker who has spent more than twenty-five years interviewing and reporting on politicians, athletes, authors, CEOs, celebrities, artists, cops, doers, and dreamers all over the country. He is the managing editor of the State Net Capitol Journal, a LexisNexis publication that covers all 50 statehouses, and his freelance work has appeared in a variety of publications across the country.
← A Few Words With: Independent Editor Naomi Kim EaglesonA Few Words With: Editor Tammy Ditmore →

A Few Words With: David Simms 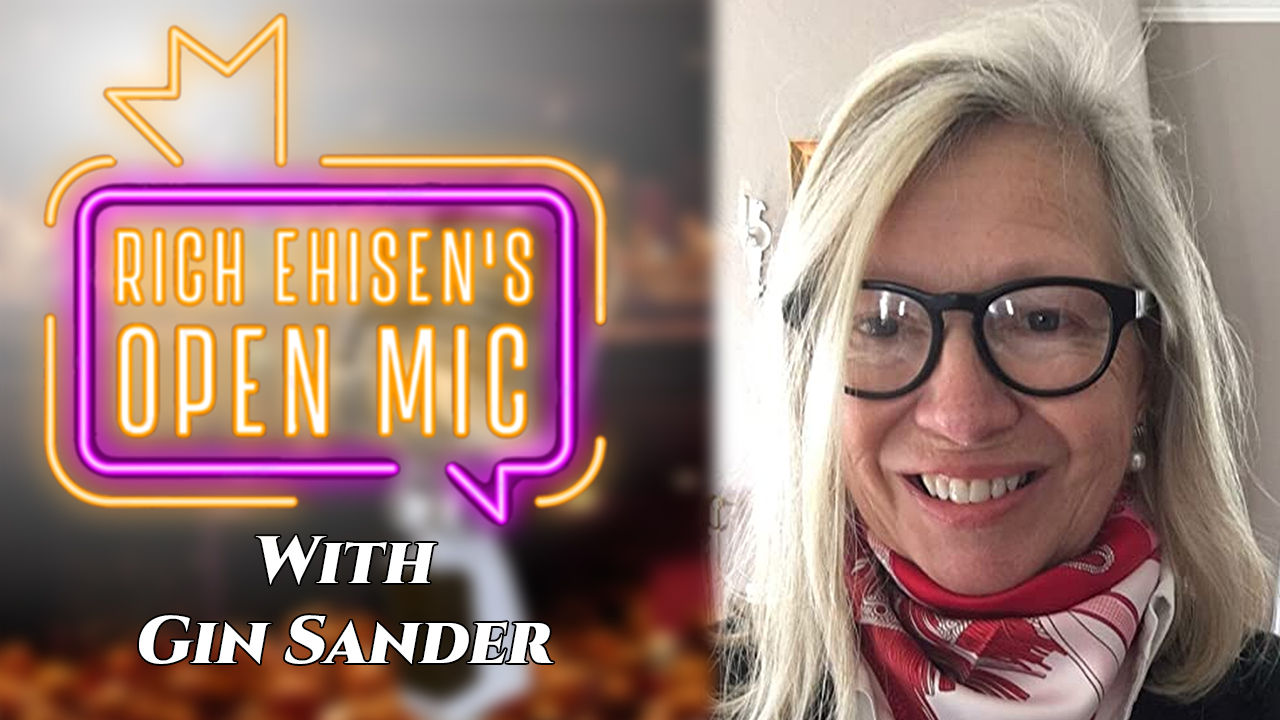