If I had a list of my favorite people that I have never actually met in person, Virginia-based thriller author David Simms would be near the top. When he’s not writing, Dave expresses his creativity as a musician and a teacher. I checked in with him for Day 33 of the Open Mic Creativity and COVID-19 Special Project.

OM: You are a writer, a parent AND a teacher – the COVID trifecta! Seriously, though, how are you holding up with all this? How has your area of the country been impacted?

Simms: What year is it? Maybruaryember? Just let me know when I have to start wearing pants again to work. What a trifecta of roles to wear right now but many are dealing with a ton worse, so I really shouldn’t complain. First of all, moving to the Shenandoah Valley a decade ago has been really a blessing. If I was back in New Jersey or Massachusetts, I might be feeling a lot worse. I feel for my friends up there. The virus hasn’t hit too hard here, comparatively speaking (knocks on wood) but we’re still fully locked down. Thankfully, we don’t have idiots clamoring to get their nails done, tattoos inked, or play a few frames of bowling while the spikes are still growing.

I’m holding up well, sort of, kind of, not really – some days. Teaching online has been a task but the worst part, honestly, has been missing my students. Not having a chance to say goodbye is rough and while communicating online is nice, it’s not the same. I feel for them. Then there’s the creature who calls himself a first grader that wakes at dawn and proceeds to push me closer to the asylum I wrote about right here in town. It’s tough on him, too, and kids aren’t equipped with the coping skills adults are supposed to have.

All in all, it’s forced me to reassess everything and appreciate the little things, as cliche’d as that sounds. With a ton of writing to get done, the juggling act has intensified, rather than eased up.

Still, I stay somewhat sane by looking for the positives (such as not having any graves in the backyard – yet).

OM: How has all this impacted your writing time? Are you able to keep up any kind of regular writing schedule?

Simms: Back to the juggling act, which is now flaming swords covered in angry spiders, greased in blood. I have to force the time, even though my two to three job have dwindled to one. A monster seeking attention from dawn to dusk daily pushes writing to the darkened hours but still, I squeeze in some time elsewhere. There is no regular schedule. When this hell first began and all of our worlds were up in the air, I couldn’t focus on the projects I was supposed to – at all. I know some writers would be fueled by this – but my characters ran screaming from me. Thankfully, there was a flash fiction anthology open – Dark Solstice Holiday Horror. I yanked open the new wound ripped by Covid 19 and had a drink while listening to some good music. Out of nowhere, a bunch of weird story ideas spilled from me and the therapy of writing helped in an amazing way. I subbed five stories and they’re all in this great book about the weirdity of the summer solstice. I even played around with some comedy. Now, the muse seems to be resurrected and my characters have returned, albeit a little more screwed up.

OM: I’ve heard vastly different opinions from agents as to how this will impact the publishing industry going forward. What do you think?

Simms: What a great question! I was all set to head to Thrillerfest in July (an amazing conference set up K.J. Howe) to try to woo a few agents for the new books. Then, poof! Every conference went up in smoke (thankfully, Tfest is still alive, virtually – a herculean feat). In my opinion, writers have a greater shot a landing an agent in person, so we’re all back in the slushpile. As for the book publishing world, I have no idea. Logic would suggest that people are hunkered down and reading a ton (I know I’ve devoured at least a book a week since mid-March) but we all handle stress differently. The libraries and independent bookstores which are great for writers are temporarily erased by this damned thing. The librarians I know are stressed. My bookstore owner friends are stressed.

I’m hoping that when all of this reopens, hopefully soon, when it’s safe, that readers and publishers will have a greater appreciation for new books. I know I do, as a reader, reviewer, and writer.

OM: You are also a musician. Has this shit show given you any inspiration on that front? Or in any other areas of your life?

Simms: Flashback to March 13th. I was all set to perform at my school’s talent show. Two teachers, two students, and a resource officer ready to jam on Stevie Ray Vaughan, Pink Floyd, and whatever along with a great group of students. Hours later, the school sat dark and amps, mics, and drum set collected dust.

I had been working on a few new original songs, hoping to work with a talented singer and purchased a new music writing program.

When the dust settled, I looked at my guitars and began to hear music once again. Bought myself a new amp (a “smart” one that comes up with drum and bass parts for what you play) and suddenly, music returns as therapy until I can perform again.

In other areas of life? The writing mentioned above has pushed me into lighter areas, straying from the dark work I’d been in, just to keep some semblance of sanity. Oddly, once I spent enough time in that “light,” the stories with darkness came raging back. The inspiration? I felt the need to finish the one book for my little guy. Priorities rearranged.

OM: Have you got anything new you are working on? Or at least pondering for a future time when you are not as slammed as you are right now?

Simms: I was in the midst of writing a new thriller, something decidedly different than what I’ve been reading in the past few years, when all of this came down. It’s pretty dark but also is filled with a good deal of humor. Imagine Dexter as a married couple, but working for a good cause, sort of. I’m hoping to shop it around by summer. Also, I’m editing a middle grade novel, meant to be the first of a series, hoping that it has crossover appeal. A trio of orphans riding a train into different realities that gets weird pretty fast. Akin to that Scifi series Sliders in a way but much different style. Finally, I have a completed thriller that’s a bit on the controversial side, complete with religion, near death experiences, cults, and music. I’m sure I’ll be getting flak for it from some folks when it hits, but it still in the beta-reader stage and being tweaked.

It’s funny to me that I’ve still got a few workshops/talks lined up for FEAR THE REAPER and DARK MUSE when this is all over. The idea of eugenics here in this country (and how it nearly triggered a massive decimation of millions of Americans) is still relative today is frightening to me. For the latter, I’m loving that special education teachers across the country have embraced it just as much as fans of classic rock. I’m hoping to return to those worlds and have plans to do so once these current projects are tied up.

Managing time in this pandemic is challenging but I’d rather be around people right now. That fuels the writing a lot more, especially with dialogue.

Rich Ehisen is an award-winning journalist, editor, and public speaker who has spent more than twenty-five years interviewing and reporting on politicians, athletes, authors, CEOs, celebrities, artists, cops, doers, and dreamers all over the country. He is the managing editor of the State Net Capitol Journal, a LexisNexis publication that covers all 50 statehouses, and his freelance work has appeared in a variety of publications across the country.
← The Creativity and COVID-19 Special Project, Day 32: Alexandra SokoloffA Few Words With: Independent Editor Naomi Kim Eagleson → 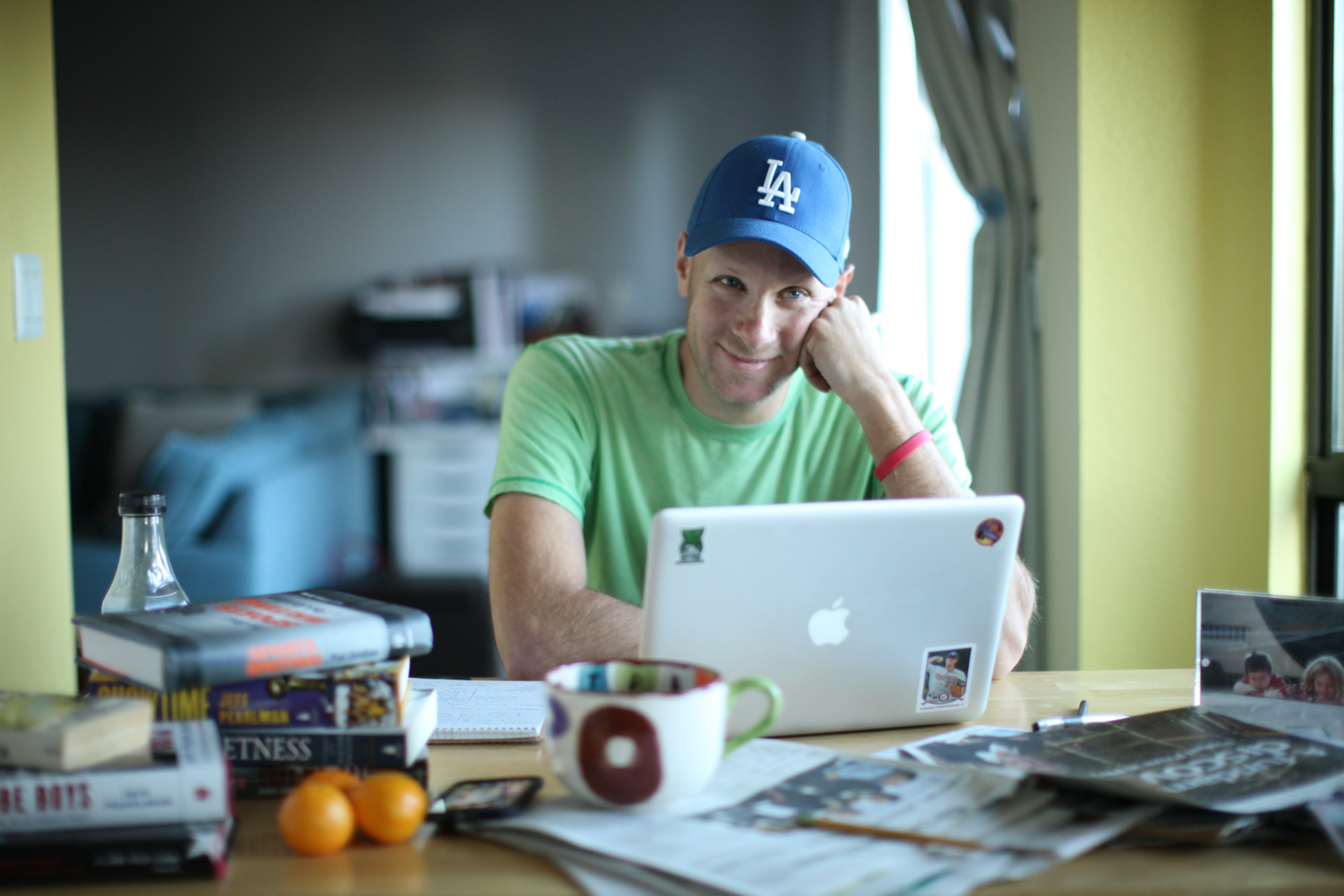