The Open Mic: Writers in Their Own Words with Jeff Pearlman

Jeff Pearlman has forged a reputation as one of the best sports biographers on the scene today. Several of his 10 books have landed on the NYT bestsellers list, including stellar tomes on the likes of Brett Favre, 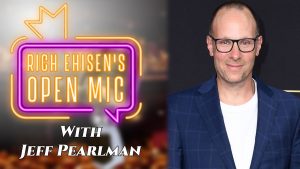 Walter Payton and the 1986 Mets. He has written two bestselling books on the Lakers multiple dynasties, including Showtime, which was turned into one of HBO’s most popular series (under the name Winning Time because why would HBO have a high profile series with the name of its top competitor?) Jeff’s appeared on this week’s Open Mic to talk about his latest book, The Last Folk Hero: The Life and Myth of Bo Jackson.

Rich Ehisen is an award-winning journalist, editor, and public speaker who has spent more than twenty-five years interviewing and reporting on politicians, athletes, authors, CEOs, celebrities, artists, cops, doers, and dreamers all over the country. He is the managing editor of the State Net Capitol Journal, a LexisNexis publication that covers all 50 statehouses, and his freelance work has appeared in a variety of publications across the country.
← The Open Mic Podcast and YouTube channel!The Open Mic: Writers in Their Own Words with author Connor Sullivan →